May 31, 2012February 18, 2015
DISCLAIMER: I do not do book reviews. (Clicky HERE to see why.)
But the book I just finished is so special, that instead of pulling everyone in the world aside to rave about it, I thought I would try my hand at a review. (Heaven help us all.) 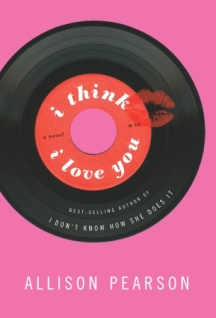 “I Think I Love You” by Allison Pearson
Publisher: Knopf (February 8, 2011)
Pages: 336
Format: Audiobook
This is a story told from two points of view–which I sometimes find annoying.
The story opens in 1974 with Petra, a thirteen-year-old girl from Wales. . .who is OBSESSED with David Cassidy. Her favorite thing to do–besides play her cello in secret–is lay around her best friend Sharon’s bedroom and read “The Ultimate David Cassidy” magazine. The best part of this mag is the personal letter written directly to the fans from David himself.  Petra and Sharon feel like they actual know David….deep down. They know he loves horses and his favorite color is brown and his favorite food is. . . .
The parallel story is twenty-two-year-old Bill, who has just landed his first real journalist job in London, writing for (embarrassingly enough!) “The Ultimate David Cassidy” magazine. Bill has never met David, never listened to his music, never seen The Partridge Family. Yet Bill is put in charge of writing those “personal” letters from David. After eighteen months of this, Bill sometimes feels like he IS David Cassidy. Bill’s favorite color is brown. Bill’s favorite food is. . . .
Fast forward twenty-five years. The inevitable colliding of these two (or is it three?) people is delightfully nail-biting. And the end result was satisfying beyond words.
That’s all I’m going to tell you about the plot. Because I’m not about to spoil the surprises.
Here is what I LOVED about this book:
David Cassidy was a generation before my time. In fact, I’d never heard of him until I was in college. (Thank you, VH1 and your “I Love the 70’s” series!) However, the brilliance of this story is how I was able to simply replace the name David Cassidy with say, Michael Jackson and later, Jordan Knights, and I was right there with Petra. The crying, the longing, the loving, the music, the believing-every-word-in-the-mags, the kissing-his-poster-to-bed-every-night. I did all of that, as I’m sure millions of other teenaged girls did. The emotions were so real and so fun and so heartbreaking.
I knew this girl, because I WAS this girl.
Beside all of this, the writing is beautiful and clean and descriptive. And I would highly recommend the audio version because the narrator (Sain Thomas) totally kills the lilting Welsh accent (as well as British, German and American). She doesn’t, however, do any of the singing, leading me to find so many David Cassidy treasures on youtube. . .which has been great fun, since the only song I knew before this book was its namesake.
Four out of five stars. (It would’ve been five had it been about the Backstreet Boys.)
Who was your teenage crush? I told you mine. . . . .

4 thoughts on “Review: "I Think I Love You" by Allison Pearson”